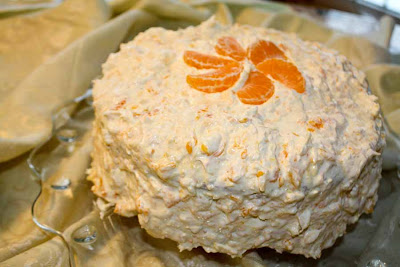 My son always picks this for
his birthday cake in December.
But this cake is awesome in the
summer because the icing is light and creamy.
Mandarin Orange Cream Cake
1 box yellow cake mix
1/2 cup vegetable oil. (I use canola)
15 oz. can of mandarin oranges including juice
4 eggs
Orange Cream Frosting
15 oz. can of crushed pineapple plus juice
15 oz can mandarin oranges drained
1 small box instant vanilla pudding
1  8-ounce container of Cool Whip thawed
Preheat oven to 350-degrees.
Start by preparing the cake pans.
I use two 9-inch round pans to make
a two-tiered cake, but you can make a 9 X13" cake.
If you need to remove the cake from the pan
to make the round layer cake,
rip off two sheets of waxed paper.
and stack them one on top of the other. 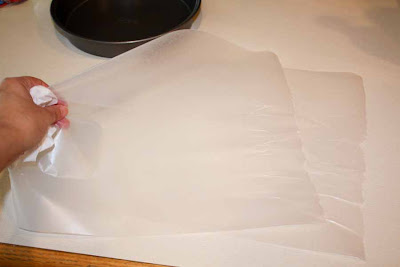 Trace around the bottom of
the cake pan you are using. 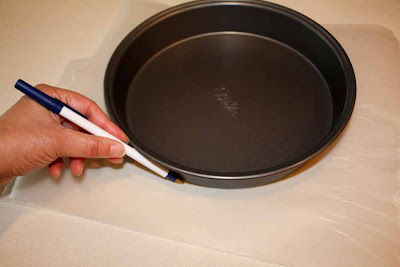 Cut out the two rounds
of waxed paper at the same time. 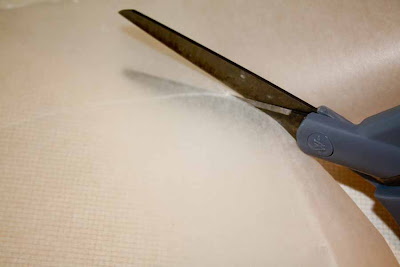 Place a waxed paper round
into the bottom of each cake pan. 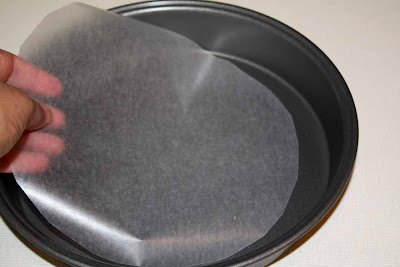 Spray with Pam over the
waxed paper and sides of the pan. 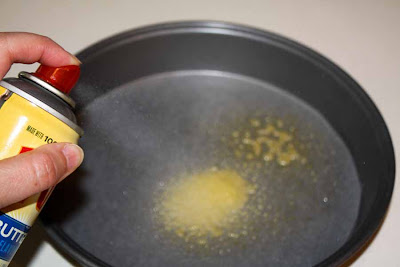 Now mix up the cake ingredients in a large bowl. 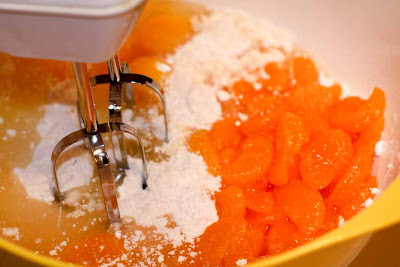 The electric mixer will pulverize the mandarin
oranges and that's fine and yummy. 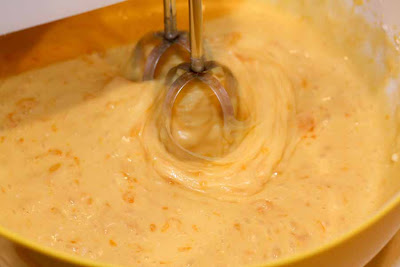 Divide the batter
among the two prepared pans
and bake according to the directions
on the cake mix box. 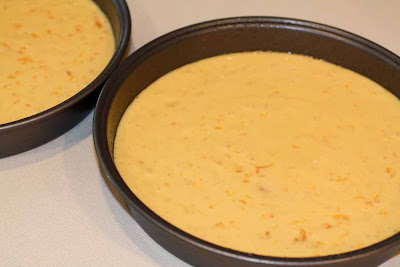 Allow cakes to cool about one minute,
then run a knife around the edge to loosen. 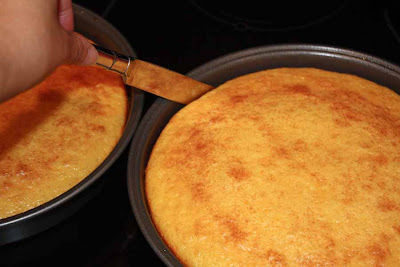 Place a cooling rack over the top of the pan... 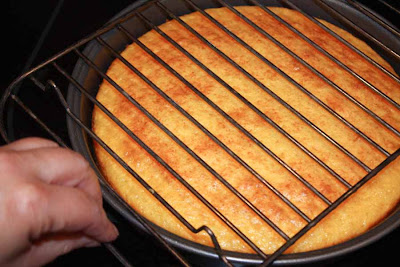 Then, using oven gloves, flip the cake over
onto the rack and lift the pan.
The cakes will easily slide out. 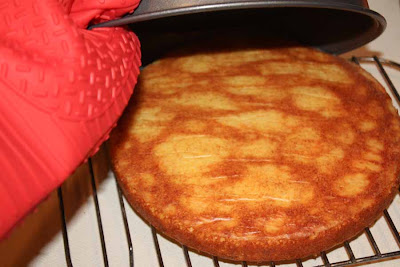 Now, peel off the waxed paper. 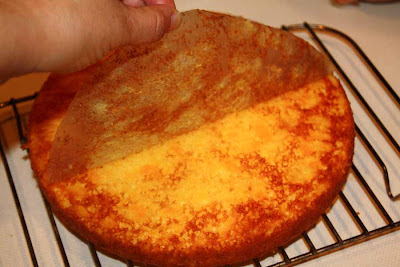 While the cakes cool completely
whip up the cream frosting.
Mix together the fruits. 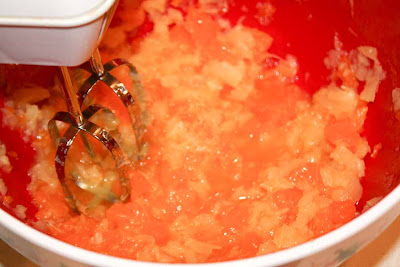 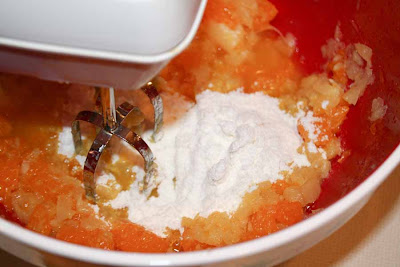 Use a large spoon to fold in the Cool Whip. 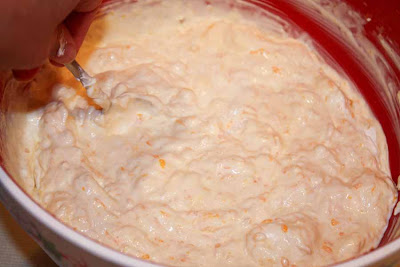 To frost the cake,
lay three small sheets of waxed paper onto
your cake plate as shown: 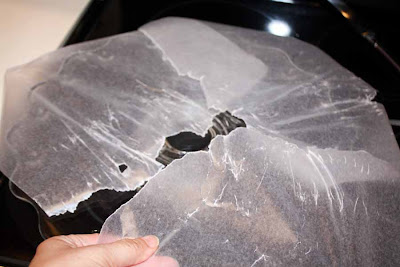 Place the first layer on top. 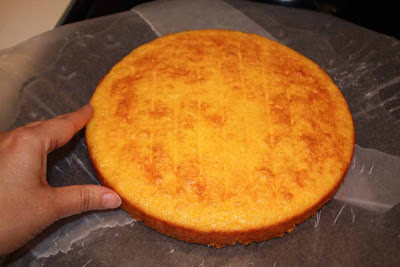 Spread with the orange cream. 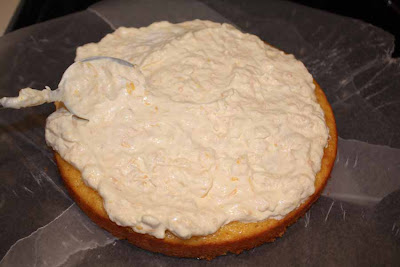 Place the second layer on top and
frost the entire cake with the orange cream. 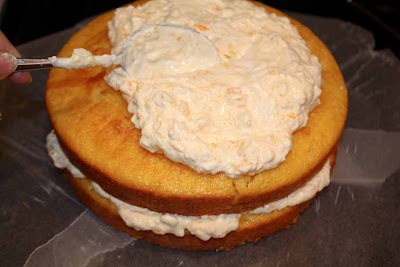 Carefully slide out the waxed paper
and you will have a clean cake plate. 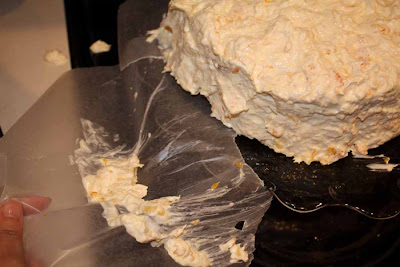 I love seeing that smile
when Sonny sees his
Orange Cream cake! 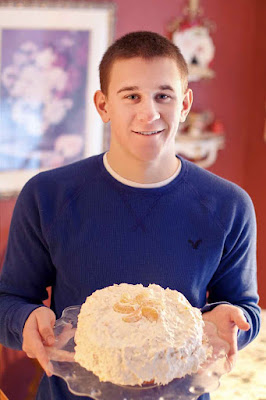 Posted by Busy Mom Recipes at 8:27 AM 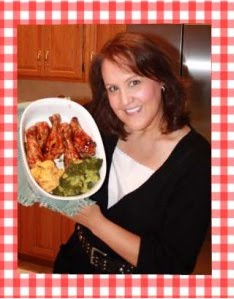 I'm not a professional cook, chef, or baker, but I have enjoyed cooking dinner for my hubby and kids for 22 years, so I think that makes me an expert at family meals. Along the way, I've collected many proven family recipes for all occasions.

I have always LOVED finding recipes online and in blogs, but being a busy, working mom, I did not have the time or patience to figure out strange cooking terms or where to find unfamiliar ingredients in the grocery store.

I decided to start a blog that explains it all in simple terms and include pictures of the process. I'll even tell you where to find oddball ingredients in the store.

I hope to offer new and old recipe ideas to make cooking easier, faster, more fun and DELICIOUS for busy moms and everyone else! 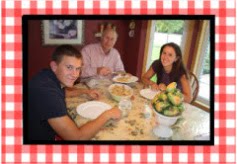 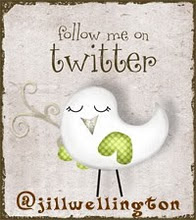